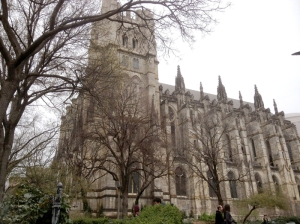 One of the joys of having an online business is having the chance to work with people from all over the world. And when there is some connection between us, it is the icing on the cake.

A few weeks ago, a customer called about having a bookplate printed for a book fair at her son’s school. Marceline explained that at the book fair, there would be a “wish list” table of books needed for the school library and teachers’ classrooms. While purchasing books for their children, parents could also purchase one of the “wish list” books to donate to the school. She further explained that she was looking for bookplates to put in the books to permanently acknowledge the parents and students for their gift to the school. While discussing possible designs, Marceline mentioned that there are peacocks on the school grounds. I suddenly realized that I had visited this school.

Last spring, my husband and I flew to New York City to visit our son. We had a wonderful time riding the subway and being tourists. One of the places we most enjoyed visiting was The Cathedral Church of Saint John the Divine on Amsterdam Avenue, which it turns out, is the location of the school Marceline was calling about. 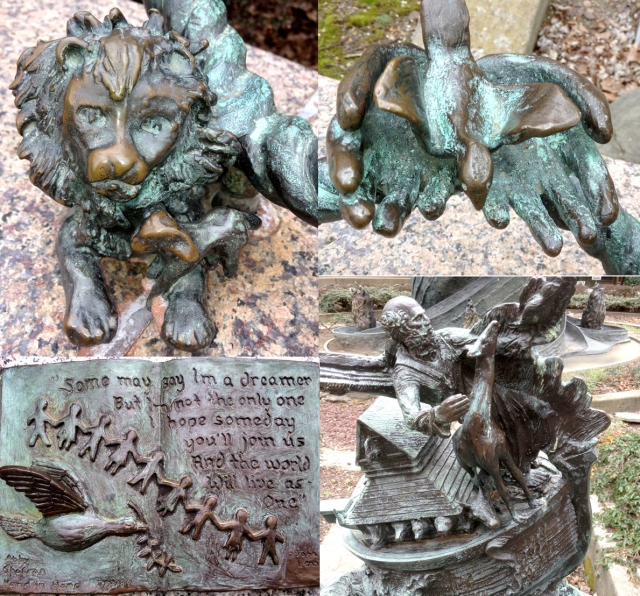 As we approached the cathedral, I was taken by the garden and Peace Fountain at the side. The Peace Fountain, a magnificent work itself, is surrounded by sculptures created by students at the school. I was astonished by the skill and effort put into these creations and spent quite a while looking at them. 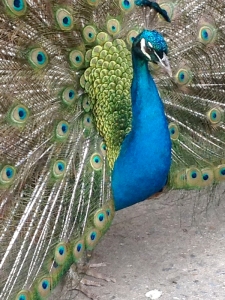 My husband strolled down the lane at the side of the cathedral and came back to report seeing two peacocks wandering about. These peacocks, one of which was white, were friendly and fearless. They seemed quite used to being around people and, at least while we were there, seemed to enjoy showing off. According to an article in the NY Times, the cathedral grounds has been home to peacocks since the 1980s, when the Bronx Zoo donated some chicks. And the peacocks are named after various deans at the school and cathedral. 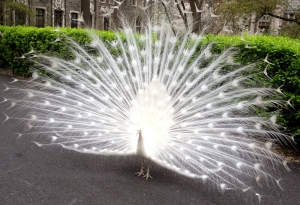 Marceline, who is the Co-President of the Parents Association at The Cathedral School, ultimately chose Bookplate Ink’s design B211 because of the animals in the elaborate border, citing the animals in the many sculptures on the church and school grounds. B211 is one of two troll designs drawn by John Huchthausen, an artist trained in architecture and religious art who created many designs for Antioch Bookplate Company in the early 1940s.

As you can see, I removed the troll from the middle of the design, added the logo for the school and the necessary text, and enlarged the design just a little. The students’ names will be handwritten on the bookplate, along with their graduating class year. The printed bookplates are now at the school and the book fair is starting. Marceline reported that everyone is pleased with the bookplates, and I am pleased to be a part of this wonderful event supporting reading and education. 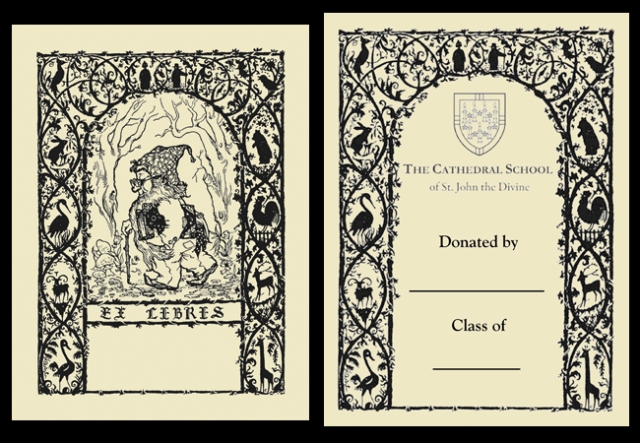